Hapres | Home | Information & Guidelines | Editorial Board | About Us

Methods: Voxel based morphometry (VBM) in conjunction with statistical parametric mapping on the structural magnetic resonance images of TRS patients (n=24) and healthy controls (n=21) was performed to assess differences between the two groups in gray matter volume(GMV).

Results: We found GMV decreased in the left olfactory, bilateral insula and right anterior cingulate of TRS patients compared to healthy controls (p < 0.05, FWE corrected). However, we did not find any correlation between gray matter reduction and clinical characteristics in these patients.

Schizophrenia, characterized by delusions, hallucinations, formal thought disorder, personality disturbance, and cognitive dysfunction, is a complex neuropsychiatric disorder. The pathophysiology underlying this disease is remain unknown. Schizophrenia has a lifetime risk of about 1% with frequently chronic and socially disabling. A body of cohort studies indicate that 20-30% of patients with schizophrenia meet criteria for treatment-refractory schizophrenia (TRS) [1]. TRS was defined by the following two criteria: (1) at least three periods of treatment in the preceding 5 years with antipsychotic drugs (from at least two different chemical classes) at dosages equivalent to or greater than 600 mg/day of chlorpromazine for a period of 4 weeks, each without significant symptomatic relief, or patients having not tolerated the side effects of antipsychotics and; (2) no period of good functioning within the preceding 5 years [2, 3]. TRS has more outstanding impact on rehabilitation of social function and quality of life. It has been the focus and difficulty of psychiatrists.

A number of neuroimaging studies on schizophrenia have provided overwhelming evidences that the disease is a disorder involving widespread abnormalities of brain structure [4]. The structural abnormalities include enlargement of the lateral and third ventricles, and reduced lateral temporal cortical, medial temporal, and prefrontal lobe volumes in the schizophrenia patients than the healthy control [5]. The neurobiological processes underlying these structural abnormalities are believed to be central to the pathophysiology of schizophrenia [6]. However, few studies have been performed on the brain structures of TRS patients by neuroimaging [7]. In this study, armed with voxel based morphometry (VBM), we investigated the changes of gray matter volume(GMV) in TRS patients aimed to explore the brain structural alterations in the TRS patients.

Patients group: The TRS patients were recruited from the Department of Psychiatry, Affiliated Nanjing Brain Hospital of Nanjing Medical University between March 2013 and December 2014. Inclusion criteria: (1) being in line with the TRS diagnosis standard (Kane Standard); a patient who had no response to the treatment of two or three kinds of atypical antipsychotics at least for 4 to 6 weeks; (2) aged 18 to 50 years old; (3) subjects were fully informed about the measurement and MRI scanning in the study. Written informed consent forms were obtained from all subjects or their legal guardians. The protocols used in this study was approved by the Ethics Committee (Nanjing Brain Hospital of Nanjing Medical University Review Board, No. KY44, 2011). Criteria of exclusion are: (1) with organic brain diseases, infectious diseases, other chronic somatic diseases, history of psychoactive substance abuse; (2) constrained dications of magnetic resonance imaging examination. The TRS patients were diagnosed by two professional psychiatrists.

Control group: Healthy subjects with matched age, gender, and average education were recruited as a control group. The criteria of healthy subjects include: (1) no mental disorder, and the current state of mind was good; (2) without a family history of psychosis in the three generations. (3) aged 18 to 50 years old. Criteria of exclusion are: (1) with organic brain disease, infectious diseases or other chronic somatic diseases; (2) contraindications of magnetic resonance imaging examination.

To examine differences in regional GMV between groups, a voxel-wise two-sample t-test analysis was carried out in SPM8. The total gray matter volume, age, gender, and years of education were set as confounding covariates. An absolute threshold mask of 0.1 was used to avoid possible edge effects around the border between gray matter and white matter. Clusters of 100 voxels (a cluster size equal to 1×1×1 mm3) or greater, surviving a family-wise error (FWE) corrected threshold of p<0.05 were considered significant. 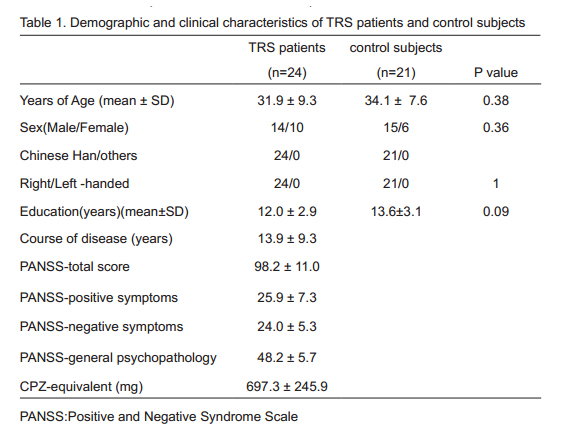 Results from VBM analysis revealed that the GMV of left olfactory, bilateral anteriorinsular and right cingulate was reduced in TRS group (see Table 2 and Fig.1). 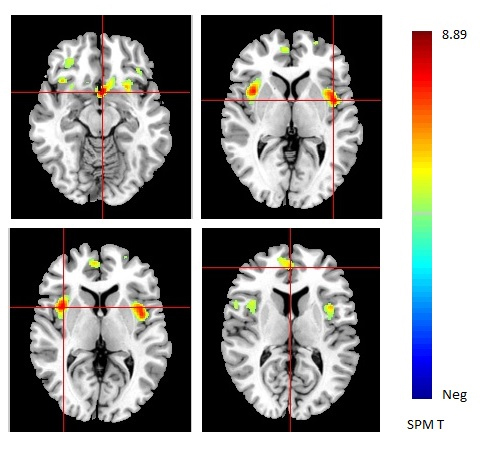 With the application of the second generation of antipsychotic drugs, considerable progress has been made in the treatment of schizophrenia. However, it will continue to be a challenge for clinicians to treat the TRS. TRS has special characteristics of psychopathology and clinical symptom. The neurobiologic mechanism underlying TRS is largely unknown.

Insula plays important roles in emotional processing, sensory stimulation, and perception of the body's inner state [10]. A lot of studies had reported that the gray matter was reduced in the unilateral or bilateral insular in the patients with chronic schizophrenia. The results suggest that the GMV alteration of insular may be degenerative [11,12]. In this study, we found that the volume of the gray matter in the bilateral insula of TRS patients’ brains was significantly reduced. The results support the conclusion that the insula should be involved in pathophysiology of schizophrenia.

In summary, we showed in this study that TRS patients have extensive decrease in gray matter and the defective areas include left olfactory cortex, bilateral insula and right anterior cingulate. However, whether the defects are responsible for the poor response of the TRS patients to the drug needs further investigation.

The authors do not have any actual or potential conflicts of interest.