Methods: A stratified, random-cluster sampling approach was used on 907 students from a Changsha, Hunan university. All participants completed a general information questionnaire, an Alcohol Use Disorders Identification Test scale, a drinking expectations questionnaire, and a Barratt Impulsiveness Scale-11 questionnaire.

Subjects were recruited from a college in in Changsha, Hunan province using a stratified, random-cluster sampling. The subjects were stratified by grade. A total of 1015 students were recruited for survey from 12 classes containing freshman, sophomore, junior, and senior students. A total of 907 valid questionnaires were obtained. This included 317 males, 590 females, 219 freshmen, 182 sophomores, 374 juniors, and 132 seniors.

Investigators explained the purpose of the student and questionnaire content to the classes as a whole. To maintain confidentiality, communication between peers was prohibited during the survey. Approximately 30 min were given to complete the written survey. The survey was conducted between February 30, 2013 - March 10, 2013.

Alcohol Use Disorders Identification Test (AUDIT) [8] is a scale for screening alcohol use disorders recommended by WHO. This scale is highly accurate in identifying early risk of drinking and harmful drinking. The scale contains 10 items. Items 1-3 measure the amount of drinking and frequency. Items 4-6 measure alcohol dependency. Items 7-10 measure various alcohol-caused problems. Total scores were calculated and a limitation score was designed to define “hazardous” and “harmful” drinking. A prior study suggested a limitation score of 7.00 for hazardous drinking in a Chinese population with a sensitivity and specificity of 99.17 % and 90 %, respectively [10]. In this study, an AUDIT score ≥ 7 was deemed “hazardous and harmful” alcohol consumption, < 7 was deemed “normal drinking”, and 0 was deemed “non-drinking” [9].

Investigators were trained in the basic language requirements for guiding field surveys prior to the survey. A survey process simulation was conducted between two investigators. The survey was conducted in a classroom, questionnaires were completed by the students at the time, and collected from them. Data were entered into Epidata by two investigators independently and proofed. After exporting the data to SPSS, a logic correction was performed for each variable error to detect outliers.

This study examined 1,015 college students in 12 classes that contained freshman, sophomore, junior, and senior students. One hundred and eight students refused to participate in, or did not complete, the survey. Nine hundred and seven valid questionnaires were obtained with a valid response rate of 88.49 % (907/1015). No significant differences in gender and grade structure were observed between excluded subjects and study samples (p > 0.05) (Table 1). 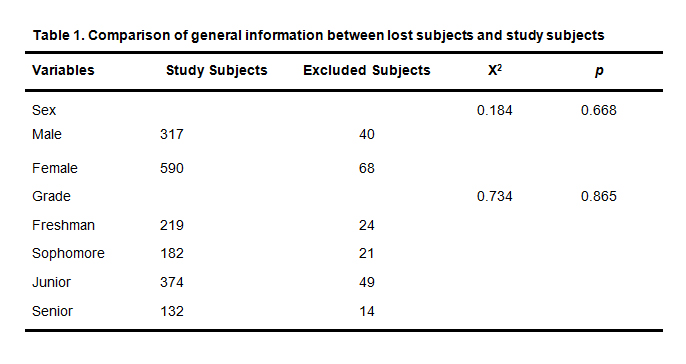 Table 3. Comparison of Impulsivity Scores between Students with Different
3.6 Analysis of Risk Factors and Harmful Drinking 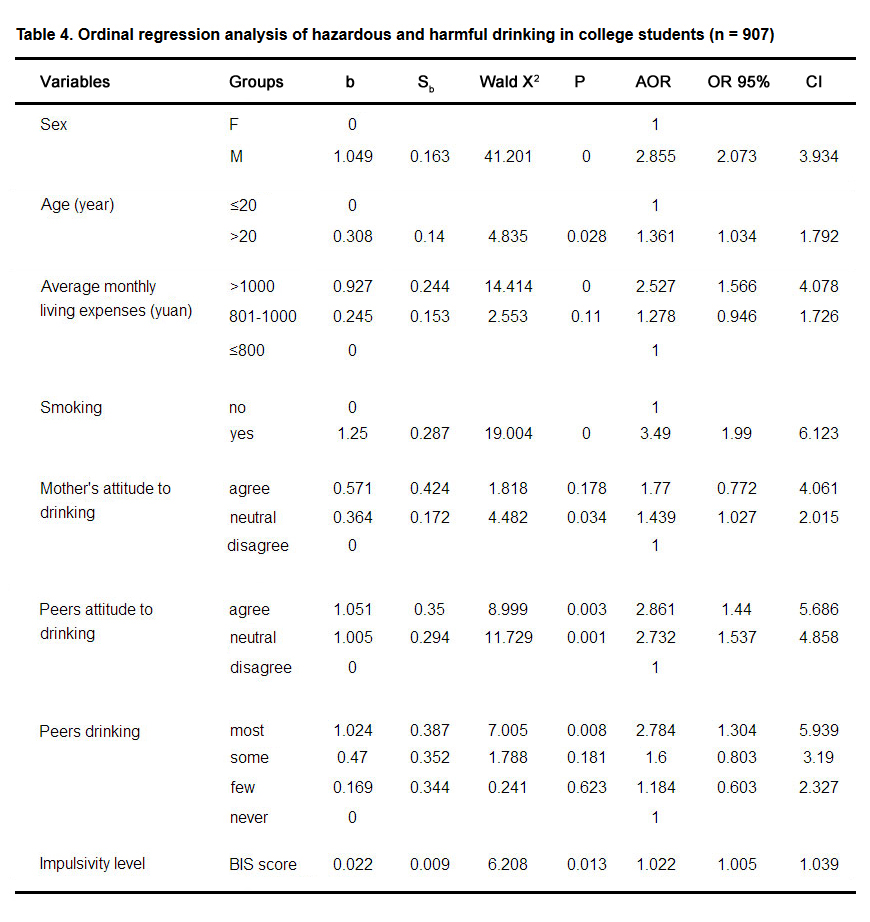 The hazardous, and harmful, consumption of alcohol has long been recognized as a danger to the college student physical and mental health with potential negative consequences for society. The recent rise in alcohol consumption rates among college students has increased societal concern.

This study demonstrated that 65.2 % of college students self-report alcohol consumption in the past year with 11% of those who had consumed alcohol having an AUDIT score ≥ 7 points, suggesting hazardous or harmful drinking of alcohol.

The authors declare no conflict of interests.