Conclusion: Reduced gray matter region volume observed in unaffected siblings may reflect a compensatory role and provide resilience to schizophrenia, while specific gray matter abnormalities of schizophrenics may be related to the illness itself.

Schizophrenia usually occurs in young adult aged 18-25 years. It is a chronic mental illness characterized by disordered thinking, emotions and behaviors, and failure to comply with internal and external environments. It is considered a functional mental illness as there are no organic changes. Changes of the study of brain structures of living organisms allowed by the development of neuroimaging technology, allows further investigation into changes in the brain and nerve systems of schizophrenia patients. After nearly two decades of research and exploration, the results of neuroimaging studies confirm that schizophrenia is not a purely functional disease. The results of brain structure imaging studies confirms that there are differences in the morphology and brain structures of schizophrenia patients. More direct evidence, involving the abnormal brain structures of schizophrenia patients, have come from voxel-based morphology comparative studies. These studies showed reduced gray matter volumes of prefrontal lobe, superior temporal gyrus, hippocampus, and the amygdala in schizophrenia patients, as well as lateral ventricle and third ventricle enlargement [1, 2]. Prior studies also confirmed that gray matter loss in the prefrontal cortex and the superior temporal gyrus cortex exists in first-episode, and chronic schizophrenics [3]. Different neuropathological changes in the brains of schizophrenia patients including cortical atrophy, enlarged ventricles, reduced amygdala and hippocampus volumes, structural disorders, hypothalamic cell loss, and volume reduction were also found in many autopsy studies.

Schizophrenia is commonly considered to be a neurodevelopmental mental illness [4]. Such abnormal neurodevelopment is thought to occur during the process of trimming and correcting synapses and regulating neurogenesis during an individual’s adolescence and early adulthood. This may expose problems previously hidden or caused by genetics, environment, or interactions so as to result in schizophrenia [5]. Schizophrenia shows neurodevelopment defects, so an abnormal brain structure might exist in healthy groups who have a common genetic background and environment with schizophrenia patients. Approximately 50 % of all alleles are the same between the schizophrenia patients and their unaffected siblings (brothers or sisters).

After confounding factors such as biological changes caused by antipsychotic drugs, chronic diseases, and anxiety and depression, as well as potential neurotoxic effects of mental disease are excluded, many studies of healthy siblings of schizophrenia patients showed that they suffer a loss of brain gray matter [6, 7].

These studies showed the pathological brain structure changes existed before psychiatric symptoms emeged. As of the date of this paper, no studies have examined for abnormal brain structures in unaffected siblings of schizophrenia patients. In this study, a cross-sectional comparison of early schizophrenia patients, unaffected siblings (healthy siblings with the same biological parents as the included patients) and healthy volunteers was made using a voxel-based morphology analysis to examine for gray brain matter abnormalities in unaffected siblings (relative to normal control).

The MRI data, and general clinical information, for 27 schizophrenia patients was collected for this study. All schizophrenia patients were inpatients and outpatients of the Department of Psychiatry, Second Xiangya Hospital of Central South University between September 2010 to September 2013. All schizophrenia subjects were assessed using the Structured Clinical Interview for DSM-IV (Patient version, SCID-I/P) of the Diagnostic and Statistical Manual of Mental Disorders [8]. Inclusion criteria included i) compliance with DSM-IV diagnosis criteria for schizophrenia, ii) more than one unaffected sibling for each patient who were brothers, or sisters, of the same parents, iii)18-45 years old with a disease course of less than 5 years, iv) of Han Nationality, dextromanuality, v) no history of nerve system disease or other major physical disease, vi) no history of abuse, or reliance upon, alcohol or substances, vii) no history of electric shock treatment, viii) no use of any medication within six hours prior to imaging scanning, ix) no contraindication against MRI tests and no brain abnormalities after the MRI scanning test, and x) comprehension of the research contents, desire to participate in, and be able to complete, the entire experiment, and a signed Informed Consent.

Twenty-seven healthy controls were collected in this study and they voluntarily enrolled through public recruitment. They were from communities in Changsha and the surrounding area. In addition to meeting inclusion criteria including items iii) - x), all healthy controls were to have no history of mental disease, neurological, or psychotic disorders or family disease, severe physical diseases or drug abuse. They must not have had any major psychological trauma, and their first-degree relatives were to have no history of mental disorder. The axis I disorder of all healthy controls was excluded using SCID-NP; a family history of mental diseases of first-degree relatives was excluded using Family History Research Diagnostic Criteria (FHRDC). All subjects (Ss) were informed of the risks and benefits before the tests and executed an informed consent form. This study was approved by the Medical Research Ethics Committee of the Second Xiangya Hospital of Central South University.

Structural MRI imaging data was acquired at the Second Xiangya Hospital of Central South University by an experienced, professional technical staff members of the Radiology Department. A Signa Twinspeed 1.5T dual-gradient magnetic resonance imaging system (General Electric, Fairfield, Connecticut, USA) was used to scan in a standardized head coil. No cognitive tasks were added during scanning. The subject lay on their back with eyes closed and was instructed to remain motionless, and try not to think about any particular person or thing. Earplugs were used against ambient noise, and a supportive foam pad was used to limit head movements. Scanning parameters included repetition time TR (12 ms), echo time TE (4.2 ms), flip angle (15 degrees), field of view (24 × 24 cm), matrix (512 × 512), slice thickness (1.8 mm), gap (0 mm), and 170 slices.

An old field inventory was used to assess subject handedness. Demographic and basic clinical data for the subjects included age, gender, and educational level. The psychiatric syndrome, and severity, of the schizophrenia patients was assessed using the Positive and Negative Syndrome Scale (PANSS) [9]. PANSS was used to assess a subject’s positive, negative, and general psychiatric syndromes in order to obtain a total score and factor scores, e.g. Points P, N and G, and record the diagnosis and disease course of the patients. Schizophrenia patient disease course averaged 18.32 ± 15.84 months. The disease course for 23 patients was < 2 years, for 3 patients was < 3 years, and for one patient was < 5 years. All were early onset. There were 15 patients who were unmedicated, 6 who were taking risperidone (2-5 mg), 1 was taking clozapine (200 mg), 3 were taking quetiapine (400-600), and 2 were taking sulpiride (100-300 mg).

Structural MRI data were analyzed with MATLAB 7.8 & SPM8 (http://www.fil.ion.ucl.ac.uk/spm). Structural MRI data were pre-processed with sub-toolkit VBM8 of SPM8, including standardization, partitioning, adjustment, and translation, and other steps, to obtain calibrated images of brain gray, and white, matter, which represents the gray matter, and white matter, volumes, respectively. The specific steps were: i) original T1 images for all subjects were subjected to Montreal Space Standardization; ii) the standardized brain structural images were partitioned into three sections, including gray matter (GM), white matter (WM), and cerebrospinal fluid (CSF); iii) the average gray matter template for all subjects was fabricated using DDARTEL; iv) partitioned brain images for all subjects were standardized, with a voxel size of 1.5×1.5×1.5 mm3; and v) isotropic 8 mm (full-width at half-maximum, FWHM) Gaussian kerneling was used to translate the images of the three groups to obtain the high signal-noise ratio and reduce individual differences. A comparison of gray matter volumes of the translated images .

The statistical analysis of structural MRI data was carried out using SPM8. The one-way analysis of covariance (ANCOVA) was used to compare and count significant differences in gray matter volumes among schizophrenia patients, healthy siblings, and healthy controls. The threshold value of significant difference was set as p < 0.001. The significant result was taken from the one-way ANCOVA as a mask, and gray matter volumes for the samples of the three groups were compared with a double-sample t test model, the threshold value, of which, was set at p < 0.05. The differences of clinical variables between two groups, or among three groups were compared with the double-sample t test model, or a one-way ANCOVA based on SPSS16.0. The correlation coefficient between gray matter volume and clinical variables was calculated using Pearson correlation analysis and a threshold value of significant difference (p < 0.05).

Demographic data and clinical characteristics for schizophrenia patients, their healthy siblings, and healthy controls is detailed in Table 1. No significant differences were found in gender, age and educational level among three groups. 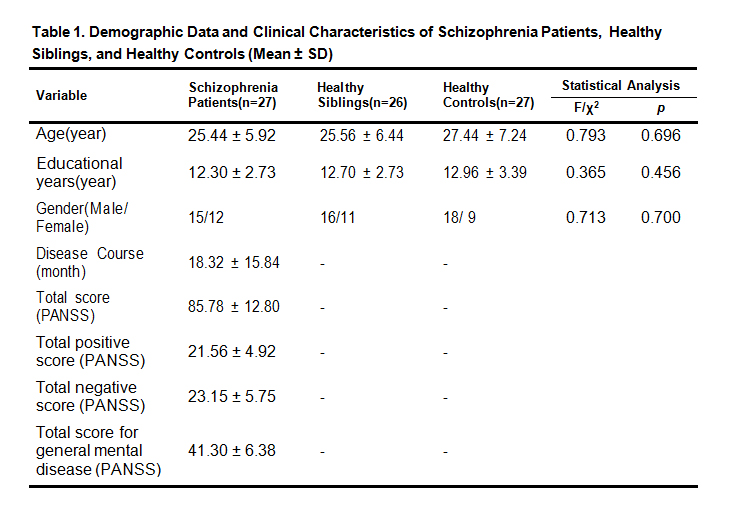 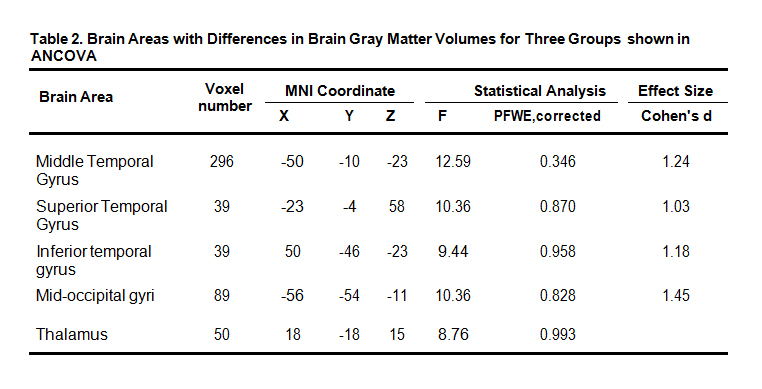 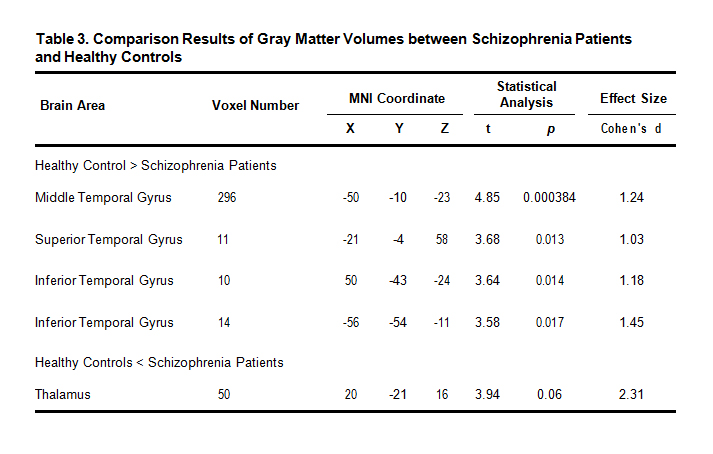 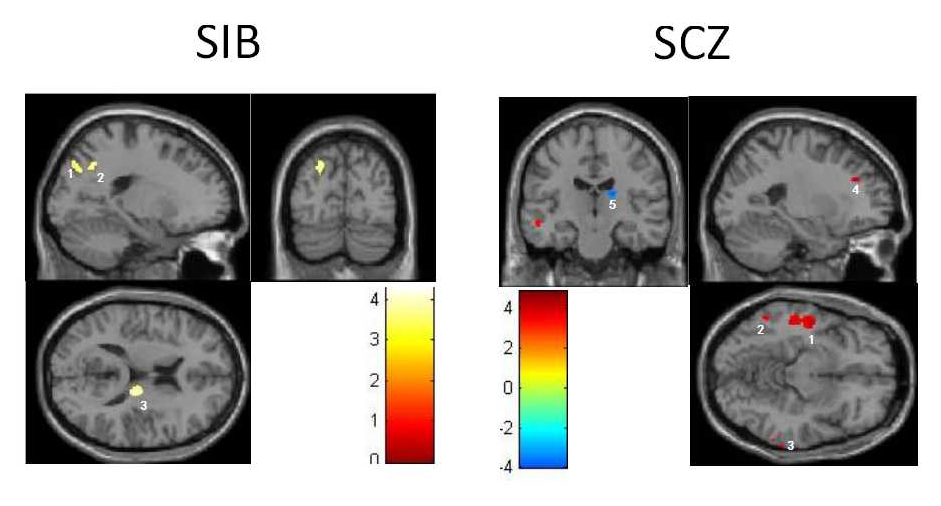 A possible reason for these apparently conflicting results may be that many of the healthy siblings included in those studies were in an age cohort with a high incidence of schizophrenia onset (18-25 years old), and may have had a higher genetic predisposition.

The damage to their brain gray matter was basically the same as that of schizophrenics and is reflected in gray matter volume decrease of important brain areas, including frontal lobe, temporal lobe, anterior cingulate, insular cortex, and hippocampus. The ages of healthy siblings in this study vary more around the period of schizophrenia onset (average age: 25.56 ± 6.44 years old). Compared to the normal controls, the morphologic abnormalities reflected of the siblings are gray matter volume enlargement, particularly in the left middle temporal gyrus, the left precuneus, and the right thalamus.

The results of a follow-up study suggest [24] that an identical reduction of functional connections to the areas of the brain identical to the gray matter loss of schizophrenia. This suggests a corresponding dynamic change process in the unaffected siblings. This mainly reflects in the gradual normalization of gray matter volumes of cerebral cortex areas in the unaffected siblings in their adulthood. In the high-incidence period, these areas however represent the loss of brain gray matter volumes similar to the schizophrenia. These areas of the brain are mostly on the left side and relatively consistent with the “lateralization” abnormality of schizophrenia.

Researchers speculate [25] that the dynamic process of “changing abnormality of gray matter volume into normality” can be viewed as a compensation-related change. The gray matter volume abnormalities emerge in the high-onset period, and may simply be a state-dependent change. Presently, a growing number of researchers believe that schizophrenia is a neurodevelopmental disorder. The main reasons for gray matter volume decreases in schizophrenic patients includes: excessive trimming of asymmetric synapses; decreased inhibitory pathway precision; and, nerve-branch trimming. One result can be prefrontal cortex excitatory-inhibitory balance disorder out of which psychiatric symptoms emerge. The high- risk of onset period for schizophrenia is consistent with the development period of important senior cognitive brain areas as well as brain areas related to cortical connection. For schizophrenia patients this period may result in onset of psychiatric symptoms due to the neurodevelopmental disorders. Their healthy siblings, at this high-risk of onset age for schizophrenia, are subject to brain structure change similar to that of their schizophrenic siblings.

After this high-risk age bracket, gray matter volume enlargement in healthy siblings may play an important compensatory protection role and spare them from the disease.